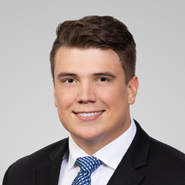 Blake Fromang graduated from Vanderbilt University with a Bachelor of Science in Human and Organizational Development with a minor in Managerial Studies. During his time at Vanderbilt, Mr. Fromang was a starter on the football team.

After graduating from Vanderbilt University, Mr. Fromang enrolled at Stetson University College of Law where he was a member of Stetson’s nationally ranked Trial Team. As a member of Stetson’s Trial Team, Mr. Fromang was a finalist in the South Texas National Mock Trial Competition.  He also interned for the Honorable Judge Charlene Honeywell at the United States District Court for the Middle District of Florida.

At Vanderbilt, Mr. Fromang made the 2014 & 2015 SEC Academic Honor Roll and the 2015 Fall Dean’s List. While at law school, Mr. Fromang won an Outstanding Advocate award at the south Texas mock trial competition. He also made the Stetson Law Honor Roll on several occasions and held the position of Vice President of the Investment and Finance Law Association.
YourCaseMatters.com
FREE CASE EVALUATION
Submit Case Online
Call Us: 1-800-255-5070