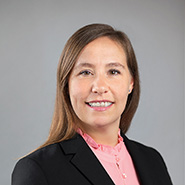 Erica Roland is a true public advocate to all Kentuckians, and she devoted her legal career in support of all those who call the Bluegrass State their home.

Before Ms. Roland came to Kentucky, she completed her scholastic career in America's heartland. Her undergraduate studies took her to Lincoln, Neb., where she pursued her bachelor’s degree in journalism with minors in Latin, English, political science, and history in 2004 before earning her Juris Doctor from Drake University Law School in Des Moines, Iowa, in 2007.

During law school, Ms. Roland clerked for Judge Constance Cohen at the Polk County Juvenile Court and served as a student attorney at the Drake Legal Clinic Middleton Center for Children's Rights in Des Moines. During her time at the legal clinic, she acted as court-appointed attorney and guardian ad litem for children involved in juvenile delinquency and dependency proceedings.

After law school, Ms. Roland started her legal career as a staff attorney at the Kentucky Department of Public Advocacy in Lexington until her promotion to directing attorney in 2015. As the directing attorney, she managed the Public Defender’s Office for Jessamine and Garrard counties, mentoring new attorneys and leading a team of seasoned lawyers while managing a full caseload of complex legal cases.

In the summer of 2021, Ms. Roland joined Wilkes & Associates' Lexington team to utilize her diverse legal background to pursue justice for those who fell victim to medical malpractice, assisted living, and nursing home abuse.

In 2015, Ms. Roland's brother, Capt. Matthew D. Roland made the ultimate sacrifice in defense of our nation when he died in combat during a tour in Afghanistan. Consequently, Ms. Roland became a member of the Gold Star Families, a recognition given to the family members of those who died in service of our country. As a Gold Star Sister, Ms. Roland devotes her time to the Tragedy Assistance Program For Survivors (TAPS), where she mentors fellow bereaved military siblings and spends time supporting deployed active duty military personnel through Military Missions, a local organization that creates care boxes to send overseas.
YourCaseMatters.com
FREE CASE EVALUATION
Submit Case Online
Call Us: 1-800-255-5070