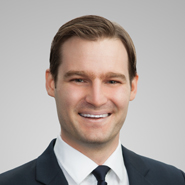 Kyle Ross graduated from the University of Central Florida with a Bachelor of Science in legal studies with a minor in criminal justice and interpersonal communication. He earned his Juris Doctor from Stetson University College of Law.

Prior to Joining Wilkes & Associates, Mr. Ross was a law clerk for both Grossman, Roth & Partridge, P.A. in Sarasota, and Anderson, Mayfield, Hagan and Thron, P.A. in West Palm Beach. He also interned with the Office of the State Attorney in West Palm Beach.

Mr. Ross is a member of the National Order of Barristers.

Upon graduation from Stetson University College of Law, Mr. Ross was honored as a recipient of the William F. Blews Pro Bono award, inducted into The National Order of Barristers, and awarded the prestigious Ralph Harris Ferrell Award for "demonstrating excellence" in intercollegiate mock trial competitions.