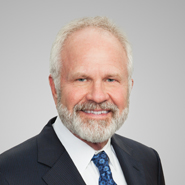 Jim Wilkes founded Wilkes & McHugh with Tim McHugh in 1985. When Mr. McHugh retired in 2019, the firm was renamed to Wilkes & Associates.

Under Mr. Wilkes' and Mr. McHugh's leadership, the firm has earned more than $1.5 billion in courtroom verdicts and hundreds of millions in out-of-court settlements. Wilkes & McHugh was recognized by The National Law Journal as one of the top firms in the nation for our results in court.

Mr. Wilkes is a frequent lecturer on personal injury issues and has been recognized across the country for his vocal advocacy on behalf of victims of fraud and abuse. He has repeatedly gained national and local media attention for the firm's effective representation of our clients.

Mr. Wilkes has a five-star AV Preeminent rating from Martindale-Hubbell for high ethical standing. He has been named one of The Best Lawyers in America by Best Lawyers since 2001, and a Super Lawyer by Super Lawyers Magazine since 2006. He was inducted into the Litigation Counsel of America and the International Academy of Trial Lawyers.

His other awards and nominations included: